Peer to Peer lending can take a variety of forms but it is basically a mechanism for those with accessible wealth to lend to others with less accessible wealth.  The lenders may look like a bank, they may look like a syndicate or they may be individuals but essentially, they act like a bank (without the clearing or cashiering function) and without the same regulatory framework.

Since the financial crash of 2008 there has been a seismic shift in the character of commercial lending.  Even prior to 2008 the direct grip of the so-called Clearing Banks on the business finance sector was waning under the competitive pressure of independent, asset-based lenders and lease-finance companies but the financial crunch and the ferment of fiscal measures imposed by subsequent governments then allowed the perfect environment for hybrid lending models to develop.

Over the past ten years the World at large has witnessed the spawning of massive technological advances around communications and information; the growth of the gig economy and the incredible speed at which it has driven commercial innovation has given rise to the shift in attitudes to financial resources and how they are managed.

Cash as a concept is still important as a means of appreciating the value of things but the cashless economy means that more or less every individual, and not necessarily just larger businesses and financial institutions, trade in value-based units that are perceived at their base level to be capable of being commuted to cash.  (Bitcoin is an extreme example of this trading but nothing to do with this discussion).

“How is this relevant to the subject of Peer to Peer lending?” you might ask.

If it hadn’t been for the financial crash of 2008, the regulatory, political and socio-economic response to it and the concurrent up-shift in the pace of technological advances I doubt that we would have seen Peer to Peer lending assume the prominence that it does now.  Its development is a response to the lack of cash available to businesses in the “lean years” following 2008 and the continuing desire for the (principally Western) “Baby Boomers” to achieve double-digit investment returns in a negatively-charged, zero interest rate economy.

Basically, because the Banks weren’t lending or paying attractive rates of interest, then Commerce (as if that were an entity in its own right) developed Peer to Peer lending as one of a number of responses to fill the void.

Peer to Peer lending can take a variety of forms but it is basically a mechanism for those with accessible wealth to lend to others with less accessible wealth.  The lenders may look like a bank, they may look like a syndicate or they may be individuals but essentially, they act like a bank (without the clearing or cashiering function) and without the same regulatory framework.

In my experience the Peer to Peer lenders seem to fall into one of two categories, those that manage funds provided by Central Government (including European Development funds) that have clearly defined lending criteria and processes and those that manage funds created by a pool of investors.  The latter has had a chequered history that includes Ponsi and get-rich-quick schemes but, it is important to note, it has also opened up the availability of cash and investment to businesses that could never hope to satisfy the lending criteria of the banking sector.

The most common feature of Peer to Peer lenders is that they try not to compete with the banks and will generally only consider schemes or borrowers that fail to meet the clearing banks’ criteria and therein lays the capacity for disasters to happen.

Peer to Peer facilities are accessed in a number of ways; direct marketing is prevalent and the internet is always available to spew-out opportunities but brokers are equally likely to introduce Peer to Peer financiers to a potential borrower as they are to introduce typical commercial finance.

The vast majority of brokers serve their clients well.  They provide good quality impartial and independent advice and support but very few are regulated and there is no recognised scheme of monitoring or accreditation.  They don’t access “whole of market” and they are equally prone to receiving marketing overtures from lenders with a desire to have their product promoted.

Peer to Peer lenders may be lending their own financial resources, they may be lending syndicated funds some or all of which they have themselves borrowed from more mainstream commercial sources or they may themselves be middle-men, offering and managing what are effectively investment schemes for large numbers of moderately small investors that may be individuals or corporates.  The capital risk of a single lend can sit in one or more of a number of areas and when a loan starts to turn bad the structure of the lender’s business can have a dramatic impact on how the distressed borrower can deal with it.

As a business recovery advisor and a licensed insolvency practitioner it can be extremely difficult advising a financially distressed borrower when a Peer to Peer lender is involved.

It is impossible to play out all of the complex configurations that can make dealing with Peer to Peer lenders difficult when the financial wheels start to fall off but I also don’t want to overplay them.  As a business recovery specialist I only see the problem cases and even amongst those there are many involving Peer to Peer lenders where we rub along well and achieve positive outcomes that meet the needs of all of the stakeholders.

Similarly, it is certainly the case that the vast majority of Peer to Peer lending arrangements fulfil their intended purpose for all of the parties but I will close with a salutary tale of woe that I experienced with one client; the particular facts have been changed slightly to protect the identity of the parties and the circumstances have been simplified but the message is clear.

An elderly and relatively inexperienced businessman (let’s call him John) inherited a plot of land.  He had a meagre state pension but his existing business and health was in decline; the land represented an opportunity to take the eventual retirement that he deserved.

As an asset the land wasn’t financially impressive.  Although in a beautiful location it didn’t lend itself readily to development and had the dubious privilege to fall under the planning control of a particularly regressive local authority.  Nevertheless, detailed planning approval was achieved for the construction of a small number of high specification residences.

John approached his usual bank to ask if they would help finance the development.  They declined the opportunity for a variety of reasons but undoubtedly considered the age, health and financial impairment of the borrower but also the fact that he wasn’t a property developer and the nature of the development made the outcome speculative.

Attracted by the prospect of securing a healthy windfall to provide for his retirement John approached a broker who introduced him to a reputable Peer to Peer lender that was keen to finance the development.  The features of the lender and the deal are pertinent: 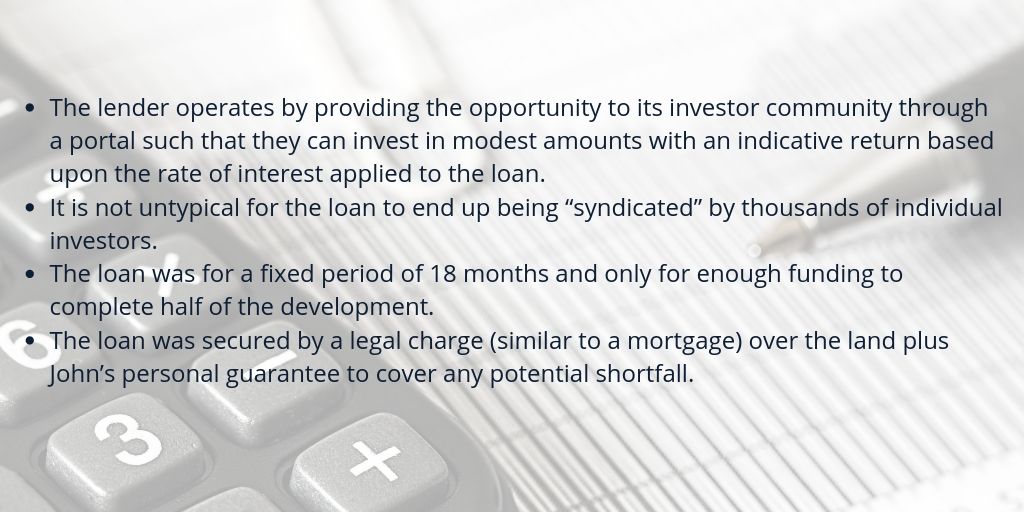 Having located a suitable builder the development proceeded but it wasn’t without problems.  The site threw up practical difficulties which were expensive to resolve, the weather was unkind and development was slow with long, idle periods without progress and the economy failed to thrive – a necessary element to secure the confidence of buyers for such up market residences.

Fifteen months in and only one-third of the development was completed.  None of the properties had yet sold and the lenders wanted the loan repaying.  The partially developed site was incapable of being re-financed.

At risk of having a Receiver or Administrator appointed, John was introduced to a potential buyer that also happened to be a builder and he was offered enough to settle the finance and trade liabilities but effectively leaving him with nothing to show for nearly 2 years of effort other than additional personal debt incurred as a result of making sure that the lender received their monthly interest payments.

If that deal proceeds the new builder stands to make up to £2M EBIT.

The story doesn’t end there and the actual case is far more complicated but the fundamentals are accurate and this example really underscores the importance of taking particular care when looking to Peer to Peer lenders as a means of financing a business. Download our TOP TIPS HERE: 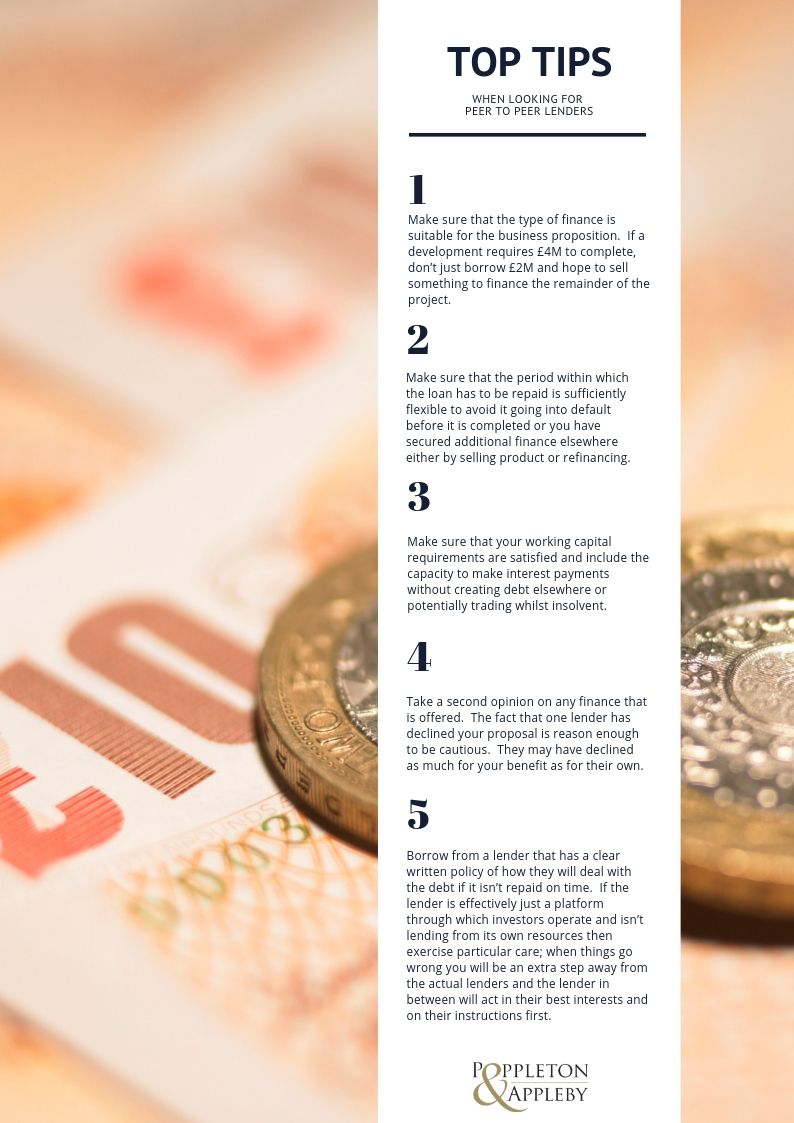 As insolvency practitioners, we are experiencing an increasing proportion of cases involving Peer to Peer lenders.  The rates of interest applied by these lenders tends to recognise the often higher level of risk that they are taking when compared to the type of proposition that would be accepted by a Clearing bank and it is perhaps no surprise to find that an increasingly higher proportion of Peer to Peer lends are seeming to turn sour than more traditionally financed loans.

Out of the tight fiscal environment of the past 10 years has blossomed a whole new commercial lending sector that seems like the antithesis of traditional banking.  Many businesses have genuinely thrived on taking benefit of the opportunity and there is no doubt that many (mostly smaller or micro) businesses are currently adding to GDP and wouldn’t exist without the Peer to Peer lending market.